Why take a French course at Cours De Français?

The course “les ateliers du cinéma” is aimed in particular at fans of French films who also want to further develop their knowledge of the French language and culture under expert supervision. This course consists of 5 studios / workshops that are treated in 10 lessons of 2 hours (20 hours in total). During each studio you will see highlights from different periods of French cinema. You will receive information about this plus a concise lexicon.

During the workshops, the film genre, style, period and the filmic / technical approach of the filmmakers are explained. On the basis of the trailers and a few selected film scenes, the participants describe places, actions, characters and their behavior or motives and other interesting aspects from the film in question.
We then discuss the press critiques: how the film was received and how it came across to us. You can compare your impressions and test them against the descriptions and critiques of the film.
You will receive a video clip or a newspaper article to prepare for each lesson. The working language is French so that you can also improve your communication skills.

The course “les ateliers du cinéma” is given by drs. Anja-Hélène van Zandwijk. She was born in France, where she grew up as a bilingual. Anja-Hélène gives courses, workshops and guest appearances in the field of French language and culture, literature and cinema in cultural centers, colleges and universities. In recent years she has focused on the new developments in contemporary literature and cinema.

Folder about the French cinema and a concise lexicon

The maximum group size is 8 people, so don’t wait to register.
We open a course when at least 5 students have registered. 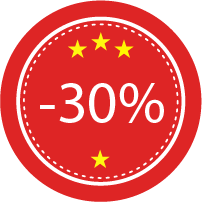 Take advantage of our Summer Offer and get a 30% discount on our group courses!

This is what our customers say:

Not sure what your level is?

Where does the course take place?